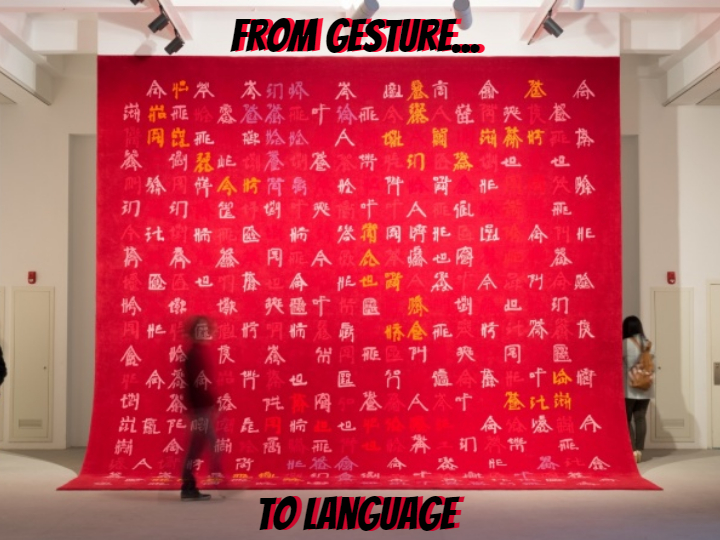 The Rockbund Art Museum of Shanghai is proud to celebrate the creative and privileged links that unite the visual arts and the practice of writing in China and in Asia.

Pascal Torres Guardiola, curator of the Chalcography department at Louvre Museum, and Larys Frogier, director of the Rockbund Art Musum, have joined forces to conceive of the exhibition “From Gesture to Language”. Assembling numerous works originating from the contemporary collection of the Chalcography department in the Louvre as well as major pieces commissioned specially for the show or else stemming from other collections, the exhibition proposes a journey that links up powerful visual and textual constructions in international contemporary art.

The exhibition accords a special interest to “anachronism”, which is to say the manner in which classical, modern, and contemporary works can match with each other – often in unexpected ways – thereby enriching their interpretation and broadening their historical perspectives.

The exhibition “From Gesture to Language” makes the connection between conceptual art and traditional techniques of creation in the plastic arts. If the concept in all works of plastic art is expressed in form, can we abstract the materiality of the work in order to allow for the spectator’s reading of merely the concept structuring the work of art? Choosing a simple concept for the object of representation brings up a question of principle: can the plastic artist let the form of his/her work take a back seat in allowing for the reading of the message contained in his/her work by means of mere words? Is Bruce Nauman’s neon lettering or Jenny Holzer’s monumental projections first of all books before being objects destined for the sight?

It is well and truly clear that all classical works, beyond their formal or even figurative appearance, only exist abstractly and mentally as a structured work – “Painting is a thing of the mind,” said Leonardo da Vinci or Nicolas Poussin. Thus nothing new, so far.… As for the relation between works of classical art and reading, it is so natural that the educated public does not intend to see or even look at a painting, but rather to read it. It is in this intellectualised conception of art where it is necessary to look for the foundation to the approach of conceptual artists.

“From Gesture to Language” intends to confront conceptual creation against the yardstick of another approach that has profoundly questioned creation in the plastic arts within the 20th century: Minimalism and Arte Povera. An approach whose final end also was to reduce the work of art to the structure that underlies it. Neither letter nor word, but the ordering of pure form like new primordial elements of a universe in gestation; in this way one must understand the presence of François Morellet’s red Lamentation.

The high point of these plastic reflections comes to flirt, in our exhibition, with the book and the engraved prints. Book objects – such as Xu Bing’s installation devoted to Saint-John Perse’s poem The Order of Birds, or Salazar’s Kafkaesque narrative dedicated to The Trial, or the collection of engravings that the Qianlong Emperor addressed to the King of France Louis XV as a way to illustrate his own martial poetry. The art of engraving, where the primary material is that of the book, the paper, or the sheet, does not suggest a fortuitous encounter between the avant-garde and tradition, but reveals the proper core of the exhibition which is dedicated to the renunciation of the traditional classical work – the most imperious symbol of which remains the most famous painting of the Louvre, Mona Lisa. Inviting the public to Funeral of Mona Lisa, by Yan Pei-Ming, is the most honest way – surely because it is the most playful – to invite the spectator to the celebration. “From Gesture to Language” proposes above all to rediscover, in a struggle between matter and spirit, the primordial role of art, which is also to nourish the senses in order to impose, on a renewed plastic form apt for the fledgling 21st century, the supremacy of the concept, in opening this relation of the gesture to language in the art of poetic language itself which constructs our literatures in colour, rhythm, and sound.

Around the collection of contemporary engravings of the Louvre, the paintings, sculptures, videos, and installations summon three major issues, from “Power” to the “Body” as well as the “Writing of Space”. Far from fixing the works under the rubric of a theme, the curators on the contrary invite the visitor to combine these issues freely through unexpected associations between the works of art.

Power of Language and Language of Power

The philosophers Michel Foucault and Judith Butler have deftly demonstrated how much language is a permanent performative act that manifests countless unstable and changing relations of power. Language is an ensemble of historical, social, and political constructions with their systems of signs, codes, forms and significations. In the exhibition “From Gesture to Language”, the artists fabricate images and words in order to question such relations, for example by blurring the boundaries between Chinese calligraphy and Western writing (Xu Bing), or in activating and reversing the simulacra of objectivity and neutrality of scientific texts (Bruce Nauman, Jenny Holzer). In this, works of art reveal that in which the human subject cannot escape from relations of power but that which is in a position to construct alternative creative procedures to think and represent the living for the making of text and of image.

The work of translation is equally a fascinating practice to understand the infinite processes in the reconstruction of language. When Qianlong, the fourth emperor of the Qing dynasty, offers to the King of France Louis XV sixteen drawings depicting his conquests and battles, the latter set out to turn these into bronze engravings but introducing modifications of forms and interpretations with respect to the original series. These two visual versions are thus displayed in the exhibition and are confronted by the paintings of the contemporary artist Zhao Xuebing, depicting 140 warriors within an extremely delicate and complex latticework of lines. 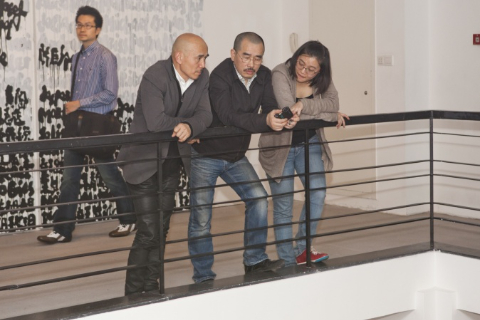 “From Gesture to Language” questions language, not only as representation of concept but also that which constructs it by means of fluctuations, transformations, mutations while the words (dis)integrates into a body or is expelled from this – whether an intimate body or the social body. Thus, Louise Bourgeois, Robert Morris, Giuseppe Penone, Kiki Smith, Yang Jiechang have effective recourse to drawing and engraving in order to express ambiguous bodily situations that are mixed up with architectonic or landscape elements. Passing from trauma to erotic states, from delimitation of space to oneiric, dream-like extensions, the works demonstrate how language does not illustrate reality but activates new and surprising situations.

Poetics and Writing of Space

When language infiltrates real space, then it becomes something else altogether. Contemporary artists extend the act of writing in exploring three-dimensional space in order to realize critical and poetic installations. François Morellet thus uses simple and long tubes of neon that stretch to the ceiling and collapses to the ground level in the manner of abstract forms becoming immaterially concrete, or like unfinished letters attempting to take form. Of a completely different manner, Martin Salazar chooses not to visualize the letter in space, instead concentrating on the radical confrontation of very opposite materials (wood, metal, felt, sound, light), rendering the interpretation of the last phrase of the famous work of Kafka, The Trial, extremely sensitive and critical. From the 6th to the 4th floor, Xu Bing has literally constructed a mesh of interconnected letters to form an impressive vortex in space. Visitors are invited to take on the attempt to read the poem The Order of Birds, written by Saint-John Perse in collaboration with the painter George Braque.

Jean-Philippe Toussaint deploys on the 6th floor of the museum a performative space, “Read/Live”, where actors take their places on a seat surrounded by videos showing different readers, along with a simulacra of a medical headset supposedly able to decipher the interior of the brain during the act of reading. Of course, the control of the spirit is simply impossible, with language having infinite possibilities.