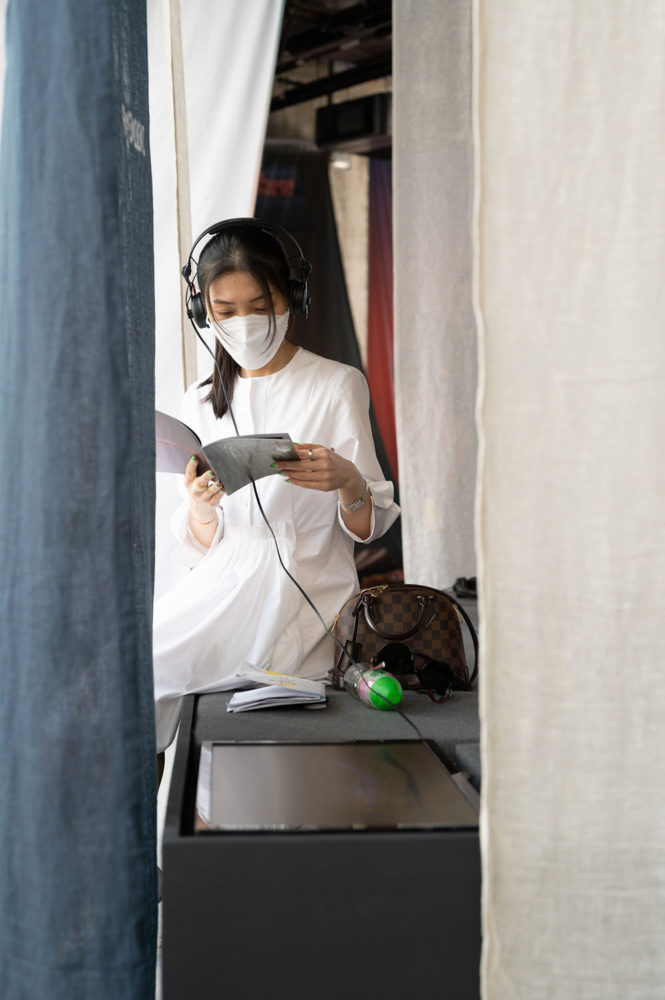 The Ones With No Name, A Desire For anomaly is a tribute to those who always fail, by choice or exclusion, to fit a name.

The Ones With No Name, A Desire For anomaly is starting with the question of utterance as a performative act that cannot be reproduced or be enclosed in an identity, a political system, a language, and that is doomed to disappearance.

In his book How To Do Things With Words (1962), the philosopher of language J. L. Austin observes that a speech is made of a constative element but also, simultaneously, of a performative one: to say something is to do something at the same time. Once it is said it is done, once it is done it is said. And we immediately lose the control of this act/statement. This unique quality of enacting the speech was used during the 70s and the 80s by different semiologists, art historians and artists (body art, conceptual art, process art, feminist art, cultural activism, institutional critique etc.)

Today, in the shifts of global order, the collapse of ideological systems, the unknown of a post-pandemic context, it seems relevant for us to revisit such reference and to raise fascinating questions related to:

– How language and body can be thrown out of themselves instead of being used to signify, to tell, to narrate, to identify oneself or the other?

– How gap, discrepancy, misidentification, misunderstanding, silence – but also sometimes rough and blunt speech act – can be a precious practice to develop in different social, cultural and political contexts where things and people can be assigned to a place, a country, a culture, a nation, a language. Or simply monitored, silenced, censored and disciplined?

– How the performative speech act can be considered as a unique practice of displacement?

– How the practice of naming is a rich and complex one, holding in itself different layers
of name dropping, un-naming, de-naming, re-naming, especially when it refers to a private or collective history, colonization, adoption, deportation, concentration etc.?

The Ones With No Name, A Desire For Anomaly takes the forms of

a space in between

a fiction
a cinema genre

a musical genre
a visual display

The Ones With No Name, A Desire For Anomaly
originate as a performative, processual and research project.

The Ones With No Name, A Desire For Anomaly reflects our very intimate feelings during the pandemic, the (self or imposed) quarantine period, new arbitrary legislation and regulation that generate a mix of profound isolation, separation, solitude, vertigo, as well as of intense focus on extremely detailed and essential physical percepts, affects and artistic creation.
Thus, the challenge of this project is to translate and to rearticulate these percepts and affects
in a critical, constructive, generous, individual and collective experience.

The performative dimension of The Ones With No Name, A Desire For Anomaly is also related to the concept and practice of the precious One Moment in Time (Whitney Houston) for each single individual and for the humanity in this post pandemic context.
One moment in time that can never be reproduced, recorded but only be experienced, remembered once in a lifetime by each individual and as a group of individuals contributing to this performance.

Each performative occurrence of The Ones With No Name, A Desire For Anomaly is unique and so will be (re)invented according to the specificity of each context.

Performance’s only life is in the present. Performance cannot be saved, recorded, documented, or otherwise participate in the circulation of representations of representations: once it does so, it becomes something other than performance. To the degree that performance attempts to enter the economy of reproduction it betrays and lessens the promise of its own ontology. Performance’s being, like the ontology of subjectivity proposed here, becomes itself through disappearance.
Peggy Phelan, “The Ontology of Performance: Representation Without Reproduction”, in Unmarked , p.146.

The Ones With No Name is more deeply engaged in the question of the formation of language and genders, repeating but also observing that the mere fact of identifying and condemning an oppressor-speaker is necessary, helpful, efficient, but in the same time no longer enough. The point, now, is to invent new ways of acting through different forms of language and actions that transform the power of insult, indifference and oppression. There are still grounds for infiltrating the new order of discourses,  reacting to them from within, creating counter-representations in the form of new modalities for the re-signification of discourse, and for the legitimation of emergent forms.

“Understanding performativity as a renewable action without origin or clear purpose suggests that discourse is not, in the end, constrained either by a determinate speaker or a context of origin. Discourse is not defined only by a social context, but also by its ability to break with such contexts. Performativity has its own social temporality, in which it is rendered possible precisely by the contexts with which it breaks. (…) The political possibility of reworking instances of discourse so as to bring them into play against the force of insult consists of reappropriating the power of discourse by deflecting it from its previous contexts.”
Judith Butler, Excitable Speech: A Politics of the Performative, London: Routledge, 1997.

The Ones With No Name, A Desire For Anomaly embraces the « mise en abyme » of the image as a pure artefact of artefact. Thus the importance of what can happen on the surface of a screen, a fabric, a sound, a curtain, an interstice, a distance or connection between two bodies, a word and a sound, a sound and a picture, a picture and a combination of sound/text/image.

The images and sounds of The Ones With No Name, A Desire For Anomaly do not pretend to speak about, around or besides a (hi)story, a locality, a people, a subjectivity.
It just utters/happens with paradoxical materials.

The friction, the collusion, the repetition, the distance between images, texts, sounds, silences, languages create the rest… as a re-presentation, a trauma, an affect, a dream, a critical question, a vibration.

I don’t care, I just do it  (…) When we shoot with a Bolex, we hold it to a place, not exactly at the level of the brain, a little bit lower, and not exactly at the level of the heart, slightly higher… And when we wind up the spring of the Bolex, we give to the camera an artificial life… We live continuously inside the situation, in a temporal continuum, but we shoot only by bits of squirting, as much as the spring can allow it… We never stop to cut the reality of what we are shooting… We take it back again and again.
Jonas Mekas, « The Film-Diary (about Reminiscences of a Journey to Lithuania) » in The Avant-Garde Film – A Reader of Theory and Criticism, P. Adams Sitney, New York: New York University Press, Anthology Film Archives, 1978.

The Ones with no Name

We openly claim our affiliation to a decisive moment of cultural activism in the 80s when anti-AIDS activists radically reinvented the economy of making and consuming images in the age of capitalism and neo-liberalism. Many of them were artists, writers, curators, musicians, art historians and they decided to quit their own individual position in favor of collective actions, often ephemeral and anonymous, or to contaminate their own field of practices with unexpected sounds, images, texts, out of the framework of the institution. During the 80s and still today, this revolutionary moment was very much neglected, despised or too lately acknowledged by the (left) academia, the artistic institution and the art communities.
Such practices were considered as being not enough subtle, elegant, meaningful, complex, beautiful and being too much straightforward, provocative, radical, blunt, reductive etc.
But it is just a fact that they were at that time tremendously efficient into revealing the exclusion of minorities in dominant media, giving and accelerating the access to health care and treatment, negotiating the compromise of governmental inactions with greedy pharmaceutical industries.

Working on the artificiality  and the mirroring effect of the image, we are also very much inspired by a « camp attitude » that still exist today and had different variations in the past, that consist of duplicating, repeating, exaggerating the image in such a way that the narrative and the form enclosed in the « legitimated », « commodified »  image, often perceived as « natural », suddenly appears as a codified and entirely constructed one because of social norms, intellectual references, artistic (exclusive) disciplines, gender identification.

That is also why we are quite suspicious of academic and curatorial concepts of horizontality, equality, solidarity, ecology.
Not because we do not believe in this (on the contrary) but because these concepts are often used by artists, curators, museums as mere concepts inside their own intellectual comfort zone and standards, instead of acting them as a critical practice in/outside their institutions, social status or directly in the daily life of public or private spaces. Means taking the risk of making these concepts simply a practice that is able to reflect, to act and to question differences, rather than levelling every people into a scheme, a system, an identity, a name.
From a fundamental and necessary legal framework of equality (human rights, democratic participation etc.) to the on going practice of the differences between us, that is for us the real meaning of equality.

But of course, claiming such affiliation to cultural activism for us is also to recognize the limits and even the impossibility of re-enacting activism today.
Just because of:
– a dramatic change in the geopolitics
– the raise of new forms of authoritarianism
– the ongoing repetition of already existing institutional formats of curating, exhibiting, thinking.
– the ingestion of arbitrary regulation, surveillance, censorship by and in in people’s mind and body
– the overall control and manipulation of people’s movements, speech acts on social media

That is also why we feel so close to Lee Kit’s blunt statement that overtly addresses the silent compromise with such apparatuses of control as a person, an institution, a country:

In fact, lately I find you repulsive.
The damage was done by you alone, but the trouble you caused harms everyone.
You are a hypocrite in a sincere world.
In your heart, you are convinced that no one understands you.
But to tell the truth, it doesn’t matter much anyway.
You are still just as disgusting.
Slowly, you begin to think of hypocrisy as sincerity. Slowly, hypocrisy becomes sincerity.

When the neck grows weary and aches for a massage, he misses his head.

He feels as though the bright lights in the city where he grew up gradually transformed into a kind of sound.
It is like the sound of bowing your head.
When you look down, every place seems the same.