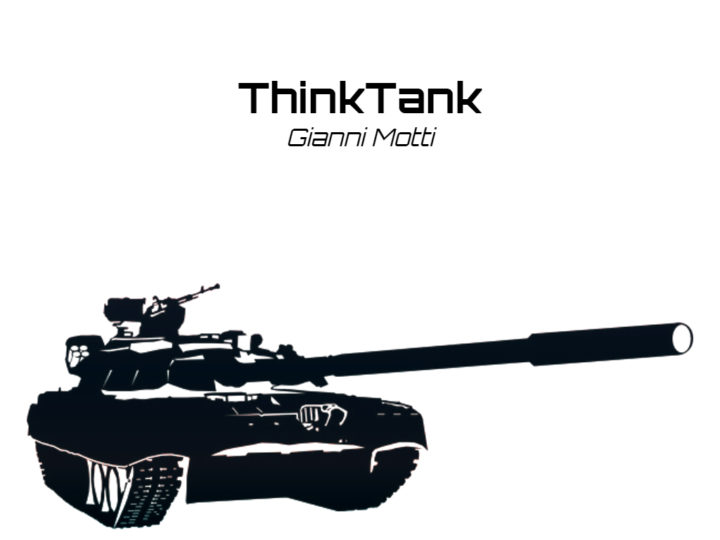 Gianni Motti’s Think Tank is at once minimal and radical

In just a few days Think Tank succeeded in provoking disapproval, rumours, intrusions, challenges, protests, and vandalism of the work and the building. Examples included:

These reactions were a direct outcome of Motti’s proposal. No one denies this. But the fact of the matter is that Think Tank is a much more ambitious and disturbing work than these criticisms and actions give it credit for.

Think Tank laid bare the unstable underpinning of a vacant space. In any society, whether democratic or dictatorial, empty public space has the specific function of allowing the celebration of different forms of discourse and use of power: political declamations, military parades, displays of opposition, personal exchanges, etc. Empty public space is also the iconic venue for the exertion of physical control over people.

The work by Motti, however, goes beyond this representation of a public space – in this case La Criée – which certain members of the public felt entitled to appropriate by covering it with slogans and spattering it with paint.

The fundamental intention of Think Tank is to materialise, and maintain in a state of extreme visual tension, a space paradoxically empty of images and discourse and, instead, “saturated” with cobblestones. This visual tension is also a semantic one, homing in intellectual abdication and the hijacking of thinking in our democratic societies. Whence the title Think Tank, drawn from the vocabulary of business and politics and designating groups of experts working together to help a political party or multinational company modify people’s opinions or consumption habits. A think tank can also be used to fabricate an idea which, strategically put to the public, will distract attention from some dangerous social issue. Today these bodies often take the form of private foundations with a sufficiently decisive influence on some political figure to affect actual programmes and public reactions.

Motti’s agenda with Think Tank at La Criée was to stand the term on its head by having people walk over the cobblestones. Like the solitary walk 25-kilometre walk he himself took in 2005 through the giant CERN particle accelerator in Geneva, this one can seem senseless and absurd; however, it is also a sensory experience rendered strange by one’s physical perception of instability, the knocking together of the stones and the fact that it is impossible to walk very fast on such a surface. Motti’s space sets up a looking and thinking situation in radical contrast with other spaces saturated with discursive and visual rhetoric. And it constitutes an artistic premise which deserves our respect and support through to the very end.

It is instructive to observe the way the intellectual abdication referred to above hides behind the terminological logorrhoea flooding the worlds of communication, economics, politics – and now art as well: allegedly intellectual loci such as ideas laboratories, think tanks, company seminars, research centres, policy hubs and societies of thinkers have now become wielders of power. Under cover of supposedly objective analysis – and while also sometimes claiming to embody public opinion and democratic debate – they can allow themselves to instrumentalise thinking in the interests of biased evaluation, communication and diversion. Thus they become new embodiments of the power to annihilate independent thinking and stifle criticism. Quoting Edward Bernays’s apt formulation, Chomsky says, “The conscious and intelligent manipulation of the organized habits and opinions of the masses…. is the very essence of the democratic process.” He then goes on to comment, “And really that’s the leading doctrine of modern liberal-democratic intellectual thought: that if you lose the power to control people by force, you need better indoctrination.”

When Gianni Motti came to Rennes three months before the opening of the exhibition, he had no declared artistic project. However there was something reassuring about this unusual absence of a proposal, in that it signalled a determination not to fall into the productivity-at-any-price trap. Motti felt it important to first engage in dialogue about his invitation to Rennes in the context of the Ateliers de Rennes, Valeurs Croisées Biennial of Contemporary Art, whose theme was the relationship between art and business. The Biennial is sponsored by Art Norac and artistically overseen by Art to Be, whose head curator is Raphaële Jeune. Both these bodies are non-profit associations. For Motti the important thing was to evaluate the terms under which artists were taking part in the Biennial itself and in the business context; the terms of sponsorship; and the links and gaps between production of meaning and subsequent communication.

Motti was sure of one thing: if indeed Valeurs Croisées (Shared Values) are part of today’s art context, the following questions could not be ignored:

– Is artists’ involvement with the business world inherently justifiable, or is it simply a token, a bowing to the interests of partnerships, marketing and communication?

– Is it a coincidence that art is being invoked in a context marked by flagrant abdication in respect of social issues? And does the artist’s involvement in the business world reveal, conceal or reinforce this abdication?

– Is art in such dire straits regarding its capacity for meaning that production of values, with the attendant dangers of consensus and conservatism, is a last resort?

At this point it was clear that the work Motti was planning could find its critical effectiveness in some “counter-productive form”, i.e. a form which needed to be as simple as possible in order to generate maximum meaning – or at least throw up a question. The result, three weeks before the exhibition was due to open, was the proposal to pave the floor of La Criée in its entirety: a minimal act involving a rejection of any urge towards frenzied productivity. The proposal also involved representation of a space rendered unified but unsteady by the juxtaposed cobblestones, as if to make the ambiguous power of standardisation and exclusion more perceptible. To walk on the cobblestones under such uncomfortable circumstances is also to strive to remain standing, in spite of everything. And then the presence of bare, empty walls makes this space a radical representation of abdication and ambient desolation.

The posting of inscriptions and other markings on the walls betrays a confusion between the street as space and its representation. As a result, the artist’s determination to maintain his work’s status as representation – of cobblestones and  nothing else – was interpreted as an act of censorship. It is interesting, then, to note that the actions that took place in the art centre space are those no longer to be found in the street and in the seats of a power that really does constitute a present danger. It is as if such opinions now need an accredited representation of public space in order to be able to express themselves. Except that Motti’s representation of public space is anything but accredited, and the art institution housing it takes that risk, with no trace of naivety whatsoever.

What is more disturbing, on the other hand, is the fact that this confusion of real with representational space is the doing of people who themselves work in the fields of art and theory. Under cover of socio-political collectives, artists are now moving against art bodies, destroying works and forcing the closure of exhibitions. The aggressive collective in Rennes is vaguely reminiscent of the Baader-Meinhof gang. At the San Francisco Art Institute in March 2008, animal rights groups backed by artists succeeded in shutting down an exhibition by Adel Abdessemed. We have come to a strange pass when thinkers and artists sabotage the work of other artists. We live now in a new era in which rabble-rousing tactics allow an upsurge of insidious forms of censorship, disregarding the content of an artistic proposal and involving the hijacking a work of art for purely ideological purposes.

The other issue at stake in Motti’s Think Tank project was the creation of a work within La Criée: the production budget for the work was to be administered by the centre itself and this was agreed on at the outset. But above all, production of the work was to be carried out with real commitment by the entire art centre team – in terms of the technical aspects of actually mounting the exhibition, of course, but also in the context of the artist’s challenge to the meaning of work within a body like La Criée. Thus Motti suggested to the team that they take a fresh look at the “minimum service” requirement written into new strike legislation. Rather than a total work stoppage, this minimum service involved consideration of priorities in the art field which might be neglected in a situation of work overload in terms of administrative and financial matters.

Since it is true that there exists a reductive reading of Motti’s work as mere provocation, this a priori has to be transcended in Rennes and the following question put: just how far, today, can an exhibition curator go in defending an artistic project? Motti’s provocation is never gratuitous or aimed at self-gratification or publicity-seeking. It is, rather, a frank approach to risk-taking and to the importance we accord to the production of meaning.

As a counterweight to the attacks on Motti’s work and the art centre, other forms of appreciation of and commitment to the artist’s idea deserve mention:

– The surprise and fascination of individual visitors as they looked at and walked through a space at once shaky and solid, empty and full, saddening and stimulating.

– The arrival of a young Japanese woman who decided to sleep in the space for two nights and, as she put it, “imbue herself” with the installation.

– The unexpectedly high attendance figures on a day and in a time slot outside the art centre norms: one Sunday morning between 9 and 11am, 200 separate visitors discovered the space in the course of a stroll through downtown Rennes.

– The improvised picnic by a group of young people at 3 in the morning.

– The guided tour of the exhibition for sight-impaired visitors, for whom the tactile and sound experience of crossing the cobblestones triggered numerous mental images.

– Reception of the film Evening.walk.on.a.moving.floor, a pertinent, sensitive reading of Motti’s work conveyed by a walk over the noisy, unstable cobblestones.

– The rewarding cultural mediation achieved: fascinating visits with a range of audiences including the Université du Temps Libre (Free Time University), art workshops with children, and interchange with neighbourhood services from Rennes.