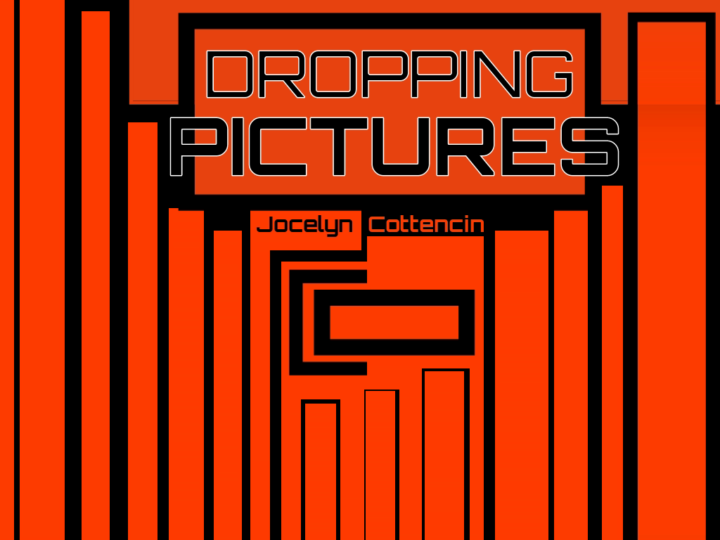 Is it possible to write about an oeuvre whose creative principle is to the development of a constant state of becoming?

How to create a form that is sufficiently open as to allow for permeability, encounters and collaborations – but also for solitary strolling, backtracking and bypassing, extension and suspension, acceleration and pause – both reproduction and that crystallization?

Where to be in a place where a body of works no longer exists? To abandon the claim that one can delimit an artistic production, whose only raison d’être is a state of fluidity and mutation?

Jocelyn Cottencin’s images represent not what they show, but that which is already outside the field of vision. Still others slacken in a pendulous pause, to the point that there is a narrative breakdown of the reality they supposedly represent.

The artist’s works also employ writing where letters mass together, not simply for graphic signification, but in order to produce a plane of consistency composed of joints, ruptures, clumps, splits, twists, etc.

When reflecting on the work of Jocelyn Cottencin, we must consider writing as an act of “letting go”, where the words go on to produce others, flux that at certain moments resonates with the work.

Jocelyn Cottencin’s graphic work and visual oeuvre call into question the sites of power. The act of relinquishing power for empowerment: the power to make, to displace, to cross, to construct. It is at this junction that we glimpse the true political dimension of an aesthetic of becoming. The “abandoning of control” embodies the refusal of the fixity of form, at the same time that it resists all limit setting and territoriality. This aesthetic of becoming is both a political and an artistic praxis. Paradoxically, an oeuvre of becoming has nothing to do with the influence of one thing upon another, or with openness to everything and nothing. It demands a full and complete commitment to permanent transformation. It requires an extreme vigilance regarding events. It is an act of commitment in itself. A discrete, modest, at times invisible act—but infinitely subtle, effective and enduring when it is taken on in this spirit of radical receptivity regarding what is “elsewhere”.

It is fairly rare to encounter contemporary artists who embark on such a sensitive undertaking, renewing their aesthetic and political base that stems from institutional critique, notably of post-minimalist and conceptual art of the 1970s. Jocelyn Cottencin’s work spans these foundational reference points while at the same time avoiding the type of dogma that can be found in many contemporary projects linked with this aesthetic heritage. These include installations that focus to the point of excess on a critique of space—such as the exhibition space, the social sphere, the public forum or simply that of the object. This may produce works that are brilliant in their formal presentation or technically seductive, but they are often empty and tinged with a tired cynicism with respect to social issues — a pseudo-poetics of space that, in the end, is very conservative and bourgeois.

The works of Cottencin maintain their affinity with the 1970s critique of art, with substantial wariness regarding the way in which works of art are enunciated and received. They never assume control of space or of the gaze. There is always a fault line, something that breaks away, an escape route that interferes with each piece. This is without a doubt related to another 1960-1970 affiliation to art such as Jonas Mekas’s films or the experimental cinema of Stan Brakhage. These are works that find their aesthetic impact and their impressive political resistance in the frenetic workmanship of an impurity of image and text. For Jocelyn Cottencin, it is obviously not a question of repeating the formal processes and materials that are produced by ‘accident’, or the ‘chaos of the image’, but rather to set in motion that which fundamentally emerges from an attitude of displacement, an empathy with the living, in the manner that Jonas Mekas stated it:

When one films with a Bolex, it is not held exactly at head-level, but a little bit lower, not exactly at the level of the heart, but a little bit higher…and when you rewind the spring, the camera is given an artificial life…One lives continuously in the Intérieur of the situation, in the temporal continuum, but you film by spurts, as long as the spring allows…one is always in the process of interrupting the reality that one is filming…and taking it up again…(…)

Although the work of Jocelyn Cottencin is based on an approach of openings, modulation and transformation, it does not let itself be absorbed or influenced to the point of losing track of itself in an extreme dissolving in exteriority. Just the opposite. Its central axis is to intentionally maintain a constant negotiation between real events and their expansion towards other spaces. It is a form which becomes open because of the generosity of its welcome, but also by its thoroughly rugged form, with its capacity for infiltration, reversal of aesthetic constraints and possibilities.

This is the case with Just a Walk, a protean and rhizomic artistic work that is generated out of different working methods defined between 2005 and 2007. These include exploratory circuits and residencies ranging from the Scottish highlands to Glasgow, Rennes, San Sebastian, Bilbao, Porto and Lisbon, collective research sessions between artists and curators, as well as works conceived by artists as different as Carla Cruz, Jocelyn Cottencin, Marcel Dinahet and Tiago Guedes. There is also the creation and expansion of an internet site, the accumulation of photographic and video images, and the creation of word sculptures made out of neon or the human body, the contributions of spaces of reflection and exchange. Finally, the work includes journal entries by the art critic and curator Jean-Marc Huitorel, the creation of a solo exhibition at the Criée Contemporary Art Center, and the staging of choreographic piece by Tiago Guedes, with the revealing title of “Diverse Materials”.

Diffusion points to exteriority and the ‘thrust towards’…but rather than an exhibit, it reflects a discrete impregnation of spaces and territories. In other words, dissemination scrambles presentations, indexing, proofs and definitions.

At La Criée, the Just a Walk project unfolds according to a specific system of visibility. Jocelyn Cottencin has designed a presentation that neatly resists the concept of an exhibition that is spatially ostentatious, seductive and spectacular.

The space is, above all, a zone of diffuse elements: luminous emissions and darkened areas, auditory evocations or transmissions, silences, the pairing of photographic images with large pockets of empty space, or the slow flow of a single video sequence. Writing on the exhibition walls allows words to drift to the surface—almost in a state of disintegration—words massing together to create a landscape; or conversely, the creation of a sculpture radiating neon words, imposing in its materiality as much as its powerful lexical dissemination.

In their entirety, these works form a paradoxical environment, i.e. an ensemble that is at once cohesive and fragmented, multi-layered and dispersed.

The other characteristic of Just a Walk is that it offers not so much an immersive space as an experience of temporal extensions, where the speed at which the images are presented varies considerably from one work to the next, and in which the strata of visual, auditory and textual materials builds up only in order to dissipate.

The visitor thus negotiates the show by moving back and forth between works or by accepting to “pause” before a work. But more fundamentally, the visitor’s progress may be compared to that of a stroll whose goal is one of curiosity regarding the show’s fault lines and fissures, i.e. not that which takes place in front of the image, but that which is woven into its margins. That which is between, elsewhere, outside of the frame.

In a way; Just a Walk is an artistic work that offers an experience of blindness rather than clairvoyance. Blindness in the sense that the artist refuses the practice of an exhibition as a visual demonstration or textual analysis. Blindness because certain works relinquish their exclusive status as ‘visual object’ in order to produce multi-sensory expansions. Blindness, finally, because after they have been seen, the works have an impressive power of persistence of vision and generate in the viewer the construction of other mental images.

Diffusion process is also about overlapping — a spilling over where one least expects them.

Thus, in the work Paysage (2007), a large luminous lightbox anchored to the gallery’s floor displays a photograph of a Scottish highland, a vast arid expanse swept by wind and clouds. But this is not all. The light that is emitted from the box radiates discretely in the direction of a floating mass on one of the inner walls of the art center. The mass is a mural drawing that has been rendered by the artist in graphite, a drawing sketching out a block in the process of formation, suggesting movement, modulation, a springing up, or, conversely, a fading away. Issued from this mass is the inscription, Alors, il y a cette île (Then there is this island).

Hence this other example of spilling over: the drawing escapes its own disegno condition, i.e. the attempt at a perfect or ideal representation of reality. At first, the drawing is not a line but a shapeless mass. Later, when the drawing takes form, it does so in its unique condition of writing. This writing carries in itself another paradox: it takes on a graphic dimension not only to signal itself, describe and make sense, but rather to display the beginning of the dissemination of a letter or image. In fact, the “root” typeface invented by Jocelyn Cottencin draws the work into a process of proliferation and transformation. Drawing, graphic elements and writing are gathered up in a material quality of “shapelessness” and in a performative act of enunciation, rather than one of description or explanation. Or, how to visualize what lies beneath writing and visual representation.

The utterance itself, “Alors, il y a cette île” is in no way an explicit narrative: the opposite of an exotic dictum, it makes an “elsewhere” palpable—an insularity inscribed directly on the art center’s building—and at the heart of the visitor’s subjective construction. The “elsewhere” takes place here and now: in the uncertainty of self and the making of art. With Jocelyn Cottencin’s phrase, the notion of defined and possessed territoriality falls away, leaving insularity’s own properties—which are composed of a positive form of drifting, an openness to otherness, and the passage between inevitably contradictory spaces.