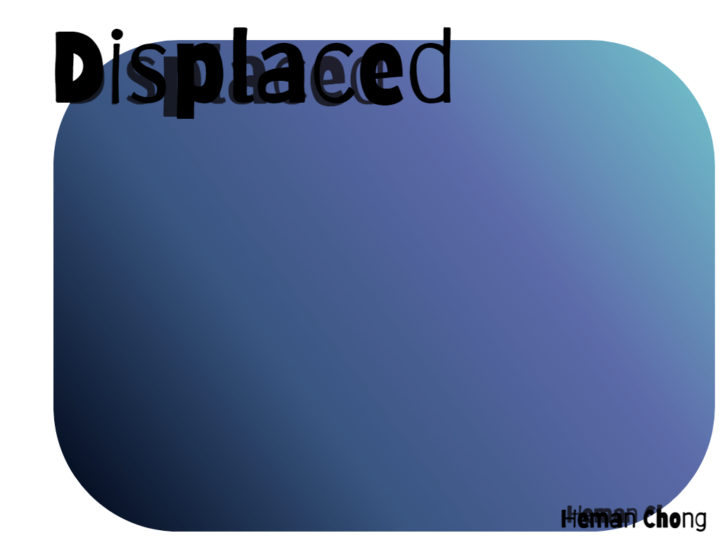 Heman Chong’s exhibition at the Rockbund Art Museum brings the visitor to the threshold of paradoxical emotions and concepts.

Space is too empty

Object is too much

Sound is too loud

Display is too artificial

Picture is too large

Transition is too disturbing

Emotion is too unstable

The act of making an image in Heman Chong’s art never resume to an immersive, seductive, narrative display.

Solitude in the act of seeing is mixed with frictions to social political address.

Language never tells the truth. It is an act of translation, transition, transformation.

Deploying layers of texts and images that are made of disruptions, contaminations, interruptions, extensions, combinations, additions.

Such word-sound-visual play announces Heman’s obsessive love of looping with text and image as a disruptive process of making and experiencing the picture.

Book as a sign is soon materialized at the reception lobby where the Museum’s souvenir shop has been transformed into a full bookshop. People enjoy leafing through books but it appears that the majority of these books are related to law: how strange. Law about law, law of physics, law for inventing of language, China and law. But this Legal Bookshop is “contaminated” with other books related to poetry, lego play, history, art, science fiction, fantasy. The selection has been made by Ken Liu, a speculative fiction writer, a legal expert, a translator, a programmer who has blown up the codes of writing.

There is never a stable and fixed message in Heman’s pictures.

A text consists of multiple writings, issuing from several cultures and entering into dialogue with each other, into parody, into contestation; but there is one place where this multiplicity is collected, united, and this place is not the author, as we have hitherto said it was, but the reader: the reader is the very space in which are inscribed, without any being lost, all the citations a writing consists of; the unity of a text is not in its origin, it is in its destination; but this destination can no longer be personal: the reader is a man without history, without biography, without psychology; he is only that someone who holds gathered into a single field all the paths of which the text is constituted.

Roland Barthes, “The Death of the Author”, 1968, Manteia, Translated by Richard Howard

So let’s go straight up to the Museum’s sixth floor where the space is brightly white, contrasting with the dark dimmed bookshop on the ground floor: “trapped” into a glass platform, a “reader” is reading on his/her cell phone the Baidu Baike (equivalent of Wikipedia) news of the day with the rule given by Heman Chong to systematically browse the Baidu text from the fifth link to other fifth link. The monochord voice of the reader is broadcasted through “speakers” all over the Museum café where the visitor can sit, walk, listen and look through the window glass the reader. But not easy to rest and chat in this pure white cube filled with sound. Such performance highlights the strange relation of the visitor his/her position of uttering/producing words, language and knowledge: it becomes and evidence that the act of reading is not only an act of ready it also an act of translation: Baidu Baike highlights the automatism/obsession of language as the site of knowledge production but in the same time it questions the reciprocity and the conditions of exchange. It is a full act of dissemination, mediation, appropriation, transformation of words. Translation is not about fixed meaning but travelling words.

In Baidu Baike we are facing the extreme saturation of space with words, opposite to what Mallarme was calling for the spacing of words and the spacing of reading. By acting/reading this saturation of knowledge, Heman Chong brings back the question of thought and speaking as a real process of alienation. As Jacques Derrida was stating:

Because to speak is to know that thought must become alien to itself in order to be pronounced and to appear. It wishes, then, to take itself back by offering itself.